Music has been a part of life of Khmers since Angkorian Empire. Some traditional music styles survived till nowadays to cater the spirit of the Khmer nation.

One of the oldest music style is Arek. Arek is a magical music that is used to communicate with spirits and natural forces. Cambodians believe that ghosts (praloeung) and guardian spirits (neak ta) can protect and heal people, and they regularly offer food and drinks to ask spirits for help. Arek music is played on string instruments, and flute instruments, and drums – which are the most important instruments in Arek, and there can be from two to twelve drums involved in a performance. The reason why Arek requires so much noise is that the spirits are believed to live very far and the music should be loud enough to reach them.

However, Arek is a rare music style nowadays. Music you most probably will hear very often on the street, when you arrive to Cambodia, is Ahpea Pipea or “marriage music”. No Khmer wedding can go without it. Ahpea Pipea is performed to honor the parents of a new couple and to attract luck and prosperity for the marriage. This music is very important, and if the ceremony is not performed, it is even believed that someone can get ill or even die. Ahpea Pipea is played with all the traditional instruments (flutes, string instruments), however, there is no need in drum noise – because it is played first of all for people and not for the spirits. 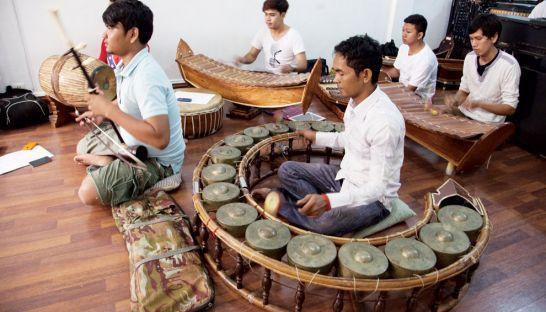 Yet another very popular traditional music style is Mohaori. Originally, it was played in temples and royal courts to accompany certain ceremonies and festival gatherings. Mohaori existed even before Angkorian times, and its name derives from Sanskrit words for unforgettably beautiful man and woman. Mohaori music is gentle and the songs usually describe daily life, love and singing lullabies. In Mohaori, 9-12 instruments are used, and the dominant instrument are Cambodian wooden xylophones: Roneat Aek and Roneat Tung.

Cambodian shadow puppetries are also accompanied by the music that was invented more than 1000 years ago. Pin Peat – an orchestra of 9 instruments, featuring different styles of flutes, xylophones and drums, – plays during shadow puppet and royal balett performances, funerals and some important religious ceremonies. Pin Peat is a largest music ensemble among Khmer traditional bands. Although Pin Peat is sometimes called “Thai music”, it originated from Cambodia, and the endurance of Pin Peat is witnessed by its sculpted representations in ancient temples of Angkor.